The biggest advantage of negative working capital (NeWC) is the holiday from bank funding. It saves the interest cost by getting current assets funded by suppliers. It may also mean that the company is a cash-rich company whose operating cycle is fast and thereby the investment in finished goods is converted to cash before the due date of payment to suppliers. 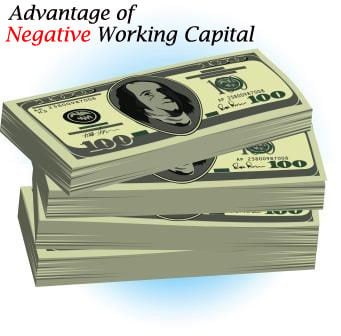 The first thing that would come to our mind is the interest cost of funds if funded by banks. It is because trade credit has no explicit interest cost. The funds are provided by the suppliers and the time limit to pay is also flexible to a great extent. This will depend on a company to company and supplier to supplier.

Cash Richness and Earnings from Investments

Some company may be smart enough who at one side negotiate hard with the suppliers to get credit and on the other side collect money from the customer faster. The money received from the customer is not paid to the supplier but are invested in short-term investments to earn interest. These companies not only save the interest cost of working capital but also earn some interest out of investments.

Must for Some Industries

Take example of companies like Amazon, eBay etc. They purchase goods on credit but sell the goods on cash and their inventory movement is also fast. The shelf life of the product is also not long. For such companies, it is obvious to have negative working capital. On the contrary, if the management is not able to achieve negative working capital, they would be considered inefficient. Similar is the case of retailers who purchase on credit but sell in cash. They also can develop free cash. Telecom companies are famous for having NeWC.

Last updated on : September 18th, 2017
What’s your view on this? Share it in comments below.
Pin It Tweet