1Samurai bonds are issued by non-Japanese companies, mainly in Tokyo, Japan. The bonds are denominated in the Japanese currency – Yen.

What is a Samurai Bond?

Foreign business enterprises/corporate firms issue Samurai bonds in Japan. To do so, the issuing company or the government has to follow the rules and regulations of Japanese market. These companies issue their bond in the Japanese market for acquiring the local currency. For investors in Japan, financial samurai bonds are an attractive instrument as there is no risk of currency variation. The issuing company can use the proceeds from samurai bond issuance for various purposes.

The financial samurai bond issues are used to get an access to the market in Japan with Yen as a currency. They can acquire capital for their business by issuing these funds. The proceeds gained from issuing these funds can be converted to domestic currency and used for financing business operations. If the issuing company’s economy is unstable, then it can use samurai bonds to invest and take advantage of the highly stable and systematic Japanese market. The issuing entity can also invest the proceeds in the Japanese market (one of the prime purpose of these bonds). The risk of foreign exchange rate is hedged by using these bonds.

The issuer can also use the proceeds for taking the advantages of lower costs by converting the issue in a different currency at the same time. Investor preferences change according to the market segment and thus a difference in cost. It can also result from short-term market conditions affecting the bond and swaps markets.

The government entity or the company issuing these bonds can explore the Japanese market without worrying about currency risk. The bonds are denominated in the Japanese currency and the proceeds can directly be used in the country. The investors purchasing these bonds are also protected against this risk. The Japanese financial regulator, the FSA (Financial Services Agency) has laid down the rules and regulations for this kind of issue.

This issue was mainly for acquiring capital for financing infrastructure development in Indonesia. Besides this, it also created a major global awareness about samurai bonds among many investors, life insurers, financial institutions like banks mutual fund companies and others.

The Samurai Bond Market came into existence in 1970. It was the first time when the Ministry of Finance allowed supranational entities and international government organizations to issue Samurai Bonds. However, there were terms and conditions about the size of issue and tenor. The reason to open the Samurai bond market was to deal with the excessive reserve of foreign currency in Japan. It was in the late 1960s when one US dollar worth 360 Yen. To reduce the pressure on the financial and monetary market of Japan, the government opened the gates for foreign organizations to invest in its market by issuing Yen-denominated bonds.

The Asian Development Bank is the issuer of the first Samurai bond in the year 1970. The issue was worth 6 billion Yen and the tenor was 7 years. The Japanese market accepted the bond issue heartily. The first government to take part in Samurai bond issue was the Australian Government, in the year 1972. Along with government organizations and multinational companies, blue chip companies also participate in this market. This is allowed since 1978. In 1979, for the first time, Sears Roebuck, a private enterprise, issued samurai bonds.

After 1990 and the great Economic Reform of 1991, Samurai bond market came into the limelight. With globalization hitting all the economies, Samurai bond issues grew significantly. In just 25 years, from 1990 to 2015, there have been more than 3000 samurai bond issues. However, in 2018, with the deterioration of market sentiments, yield of the bond market across the world is increasing. The effect has also come on Samurai Bonds. The result is the prices of these bonds is falling. 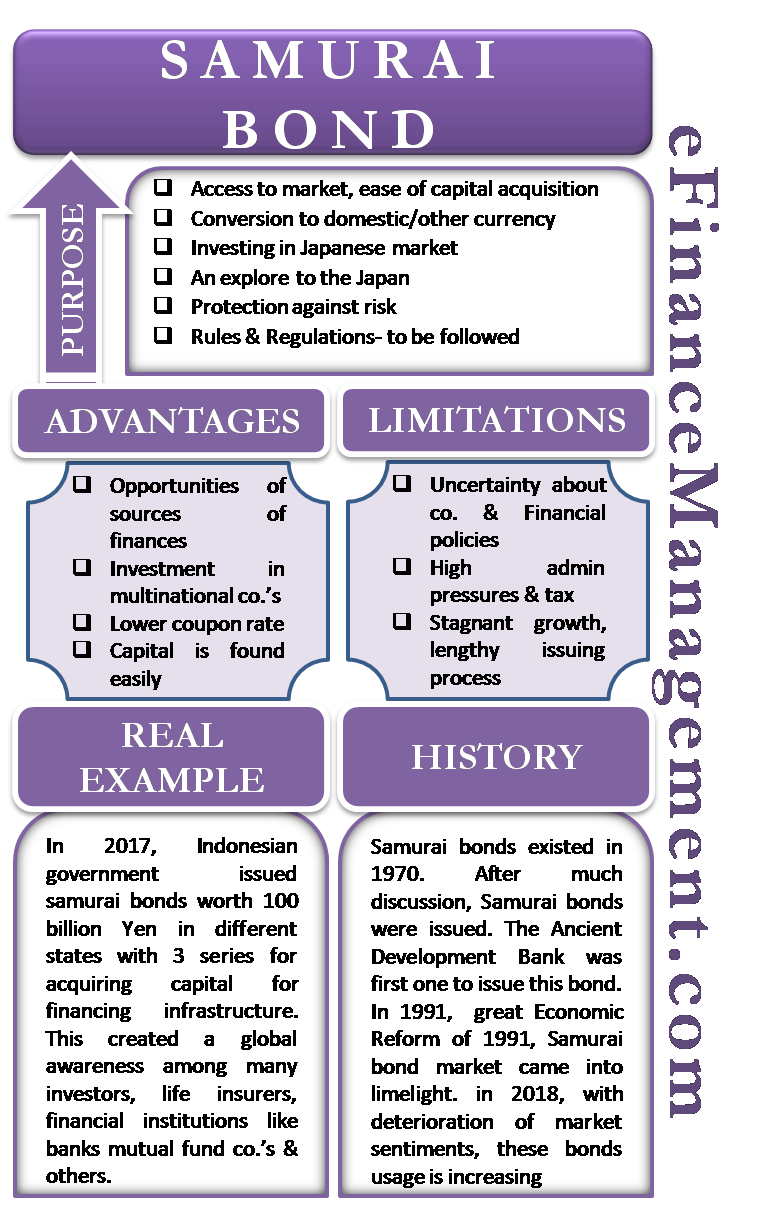 Samurai Bonds have certain drawbacks as well which are –

Companies looking to earn foreign currency or tap foreign markets can issue these bonds. It is a great source of finance for foreign companies who operate in unstable economy. The lower interest rates and the huge pool of capital make these bonds really attractive. However, before issuing Samurai bonds, companies need more assurance about the government policies, Japanese regulations, and other administrative factors.