Money Laundering is the method, criminals use to disguise the illegal origin and control of their wealth by passing it through a complex sequence of banking transfers or commercial transactions. Such proceeds then seem to have appeared from a legitimate source and thus become legal money. Eventually, it returns to the launderer in a concealed and indirect way.

Many Legal systems also use the term “money laundering’’ synonymously with various financial and business crimes. Activities misusing the financial system through securities, traditional currency, plastic money, digital, and cryptocurrency, etc. come under it. Countries also associate money laundering with money generated by activities illegal under their jurisdiction. They might be treated as Money Laundering even if those activities are lawful in countries of occurrence.

Lawful accounting of illegally obtained proceeds (money) to avoid raising suspicion of law enforcement agencies is the primary motive of money laundering. Terrorists and terrorist organizations primarily use money laundering activities to conceal the origin of their funds. The actual purpose for which the money has been collected is also hidden by it. Money obtained from organized and unorganized crimes and illegal activities such as insider trading, extortion, kidnapping, drug peddling, and illegal gambling is shown to have originated from lawful activities. Money Laundering comes into play to escape suspicion from authorities, banks, and financial institutions.

It can take shape in several ways, few of which are:

To disguise money movement, under-or-over valuing of invoices are done. When the value of an item for sale is subjective, or when the identity of a buyer or seller can be kept secret, this is an easy way. For example, rare pieces of jewelry or art can be shown to be sold at a big sum of money. This becomes legitimate money in circulation. Authorities cannot question the amount paid for such rare articles. Also, many auction houses keep the identity of their customers secret. They cannot be tracked either.

Some jurisdictions allow Companies and Trusts to keep their owners’ identity undisclosed. This provides ample opportunities to park their unaccounted money. Such companies further show investments in more such fictitious companies or in buying real estate, creating a money trail.

Tax Havens can attract large deposits in entities controlled from outside their jurisdiction. This is due to minimal record-keeping requirements. The originating country gets these deposits back by way of Foreign Direct Investment. It is exempt from taxation too. 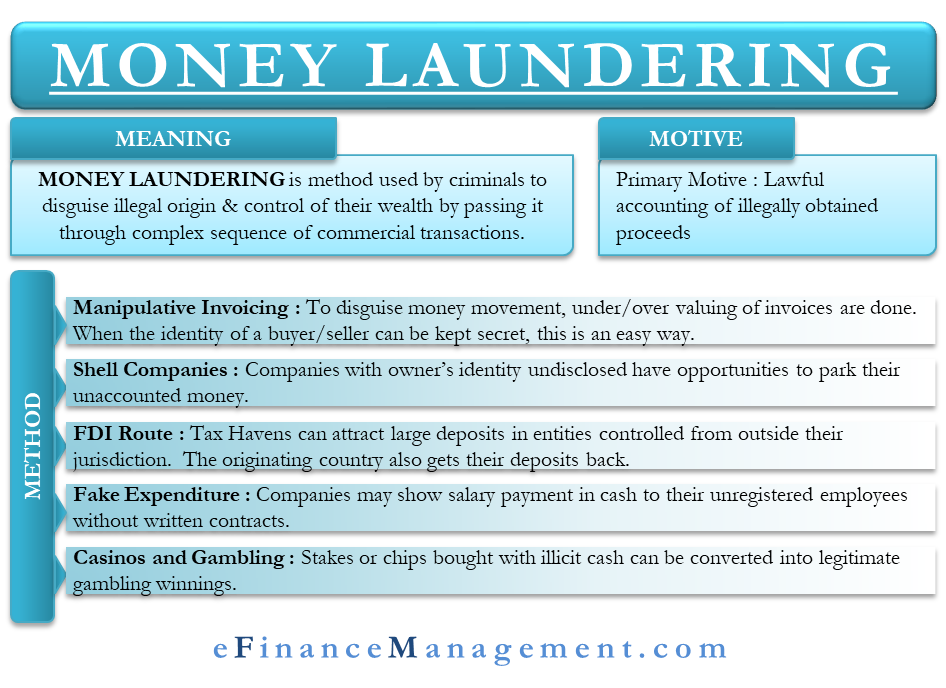 Companies may show salary payment in cash to their unregistered employees without written contracts. To channelize the flow of black or dirty money, cash expenditure figures can be inflated.

Casinos and other forms of gambling

Casinos and other forms of gambling provide a channel for Money Laundering. Stakes or chips bought with illicit cash can be converted into legitimate gambling winnings. For example, launderers can purchase chips at a casino in cash. While redemption, they can take it back through a bank transfer. Dirty money becomes legal money.

Various other ways such as smuggling cash in bulk, breaking off big amounts of cash in smaller denominations and using them for transactions, etc. can be used for Money Laundering. Launderers can capture a bank itself in a country with weak laws. They can then utilize and move money within the bank and even outside without any problem. Real estate laundering is another way of converting dirty money into legal money. For example, a person can purchase a property with cash and sell it at a huge profit after some time. Profits made will be legal and authorities cannot question it.

Danger and perils of Money Laundering

A financial institution found to have assisted in money laundering can be completely ruined. They deal with other people’s money and stand on the pillars of trust and integrity. Developing countries can attract illicit money for fast short term growth. But then they may find it impossible to bring in solid long-term foreign direct investment essential for sustainable development and growth of their economies. Such investments are dependent only upon good governance.

A change in demand for cash by money laundering can completely erode a nation’s economy. It may cause volatility in interest and exchange rates, and high inflation rates. It fuels corruption, organized crime and can result in disastrous social consequences. Money laundering is used to create shadow economies. Financial transactions are disguised to evade taxes. Reverse Money laundering is another growing menace. Criminals deemed to be running legal businesses are withdrawing legitimate money from official circulation.

It is not possible to arrive at an accurate figure of money laundered according to FATF. The illegal nature of transactions is the reason for it. It is supposedly in billions of US dollars globally. The United Nations Office on Drugs and Crime (UNODC) has been more specific. The amount of criminal proceeds worldwide pegged by it is at 3.6% of global GDP, with 2.7% (precisely USD 1.6 trillion) laundered in 2009. IMF also stated in 1998 that money laundered across the globe could be between 2%-5% of the world’s Gross Domestic Product. This amounts to roughly USD 590 billion and USD 1.5 trillion. Because of its magnitude and omnipresence, governments are working round the clock to check this evil.

Most financial and non-financial institutions globally have incorporated strict “Know Your Customer’’-KYC norms. They aim to flag off any suspicious client and resultant financial transaction. Such institutions have put continuous internal checks and policies to trace transactions of suspicious nature. Then they report it to the chief financial intelligence unit in the respective country.

Nations such as the US have criminalized Money Laundering activities with strict punitive provisions. Global action and cooperation, along with strict laws are the need of the day to control and curb this menace.

Last updated on : February 19th, 2020
What’s your view on this? Share it in comments below.