Variable Rate Demand Bonds (VRDBs) is a type of financing option. VRDB a floating rate bond with an option to sell back to the issuer periodically. Such a financing instrument gives an opportunity to the investor and the borrower to access short-term interest rates.

Government issues municipal bonds usually to fund a public project, be it, developing a hospital, school, and more. The issuer, in this case, the government, pays a periodic interest to the bondholders during the bond’s duration. On the due date of the bond, the issuer pays back the face value to the bondholder. 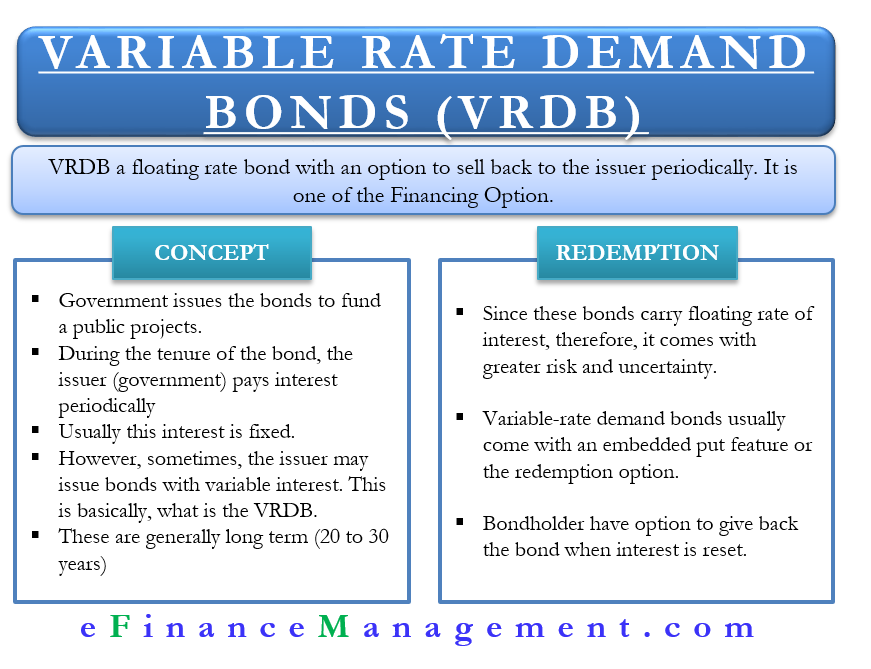 What is Redemption Option?

Since Variable Rate Demand Bonds carry a floating rate, they carry a greater risk and uncertainty when it comes to coupon cash flows. The bondholders, however, may mitigate some of the risks by a redemption option.

Variable-rate demand bonds usually come with an embedded put feature or the redemption option. Such an option gives an option to the bondholder to give back the bond to the issuer at the time when the interest rate is reset. The bondholder, however, needs to inform the concerned authority that he or she plans to return or tender the bond. Also, the information must be given by the bondholder with a stipulated time.

As said above this option helps the bondholder reduce some uncertainty and risk. The bondholder will usually exercise this option if he or she is in need of funds, or the economic scenario is such that the coupon rate is no more attractive.

The creation of VRDB as a financial tool was in response to the inflationary period that began the mid-1960s and went till 1980s. At the time, the Federal Reserve funds rate was at a record 20%. Such troubling times came as an inspiration for the financial experts to come up with a product that can overcome the high cost of fixed-rate debt.

Though the idea of Variable Rate Demand Bonds caught the attention of the issuers, market acceptance was still a necessity for its success. More importantly, buyers were needed with interest in the variable-rate debt.

This helped in creating the acceptance of VRDBs as well. Another major reason for the popularity of the VRDBs was that it was an attractive option for both issuers and buyers. To sellers, it allows them to offer short-term rates with long-term context. For the buyers, it gave them a high paying financial instrument with a put option, which helps them to alleviate their risk.

Another thing that led to the popularity of the Variable Rate Demand Bonds was the development of the market index in 1981. The index, J.J. Kenny Index, gave weekly rates to the variable-rate market. Later, the Public Securities Association (PSA) index replaced it, and it is effective even today.

Despite gaining such popularity in the 1980s, VRDBs started losing their relevance following the 2008 crisis. Several reasons led to the fall of VRDBs:

Though VRDBs have lost their relevance now, many believe they will play a greater role once the interest rate starts to move up.1–3