Following are the features of these bonds: 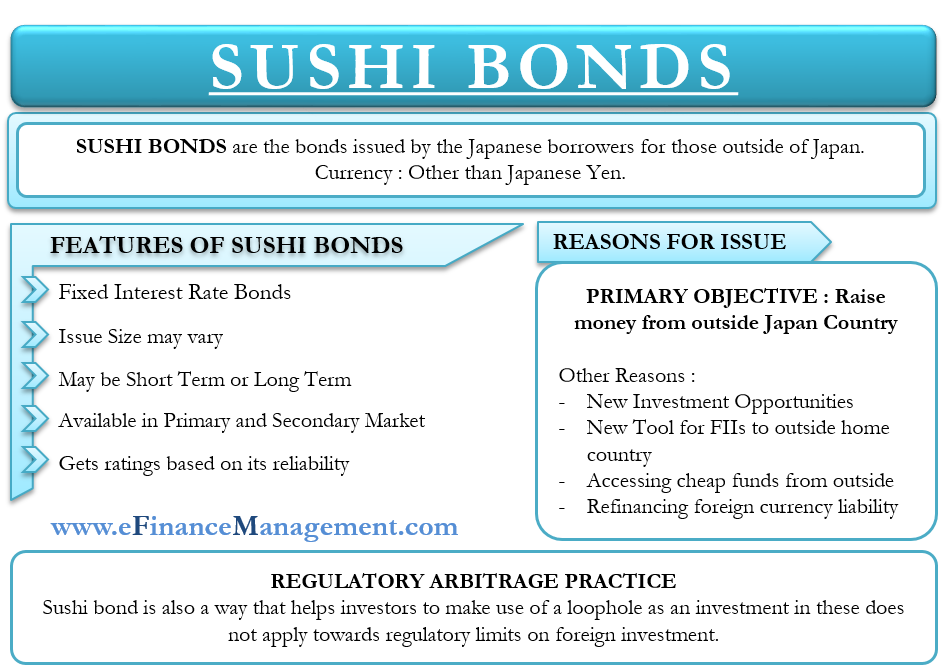 Why Sushi Bonds Are Issued?

The primary objective of issuing these bonds is to allow Japanese borrowers to raise money from investors outside of the jurisdictions of Japan. Moreover, for investors, lending to Japanese companies in their own currency is a more attractive and convenient option.

Reasons to issue bonds overseas could be many, such as:

Sushi bond is one of the ways of regulatory arbitrage practice. The objective of such a practice is to overcome unfavorable regulation. Or, we can say, it is the practice to make use of the loopholes for the benefit of the investors.  Thus, sushi bond is also a way that helps investors to make use of a loophole as an investment in these does not apply towards regulatory limits on foreign investment.

Usually, regulatory arbitrage practices for investors occur in the form of foreign market transactions. This is because such transactions fall outside the jurisdiction of one country.

Shogun or geisha bond share the same concept as sushi bond. A foreign company operating in Japan can issue a shogun bond in Japan in a foreign currency. For example, a US company issues bonds in US dollar in Japan.

There is also a samurai bond. A bond that a foreign company issue in Japan in yen is a samurai bond. Then there are dragon bonds, which are the bonds issued in Asia and priced in US dollars.

Sushi bonds were very popular in 1985, but they lost their relevance after the Japanese yen became powerful. IBM is a good example of a company issuing such bonds for their advantage.

Last updated on : April 17th, 2020
What’s your view on this? Share it in comments below.
Pin It Tweet