Payback Period (PBP) is one of the simplest capital budgeting techniques. It calculates the number of years a project takes in recovering the initial investment based on the future expected cash inflows.

How to Calculate Payback Period?

All that is needed for calculation of payback period is simply nothing more than preparing a table and then applying a simple formula/equation.

Let us understand the steps for finding the payback period with the help of an example. 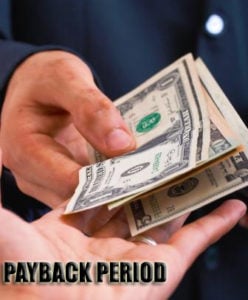 We will first arrange the data in a table with year-wise cash flows with an additional column of cumulative cash flows as shown in the below table.

From the above table, we can easily make out that the payback period is greater than 3 but less than 4 years since the cumulative value of cash flow is crossing the initial investment amount in the year 4.

To find out the exact payback period, we can use the following formula / equation:

W is the year before which the investment value is crossed in cumulative cash flows i.e. 3 in our case.

The acceptance criterion is simply the benchmark which is set by a firm. Some firms may not find it comfortable to invest in very long term project and wish to enter where they can see results in say medium to long term. Similarly, others may take the longer-term risk.

To evaluate a project on the basis of this, we can interpret a project with a lower payback period to be better as the investor is standing safely with his money back. Who would not like to get the principal back as early as possible?

The most important advantage of this method is that it is very simple to calculate and understand. If the manager requires a rough idea about the time frame for which the money would be blocked, he need not sit with a pen, paper or a computer. It can be calculated on our fingertips. It can at least tell the manager whether the project is worth spending further analysis time or not.

There are two disadvantages to this method. One, it does not consider the cash flows after the payback period. Because of this, we cannot consider two projects with the same payback period as equally good. This method will give the same rating to two projects with the same initial cash flow of 100 million where cash inflow of one is 50 million in first two years and the other is 50 million for three years.

Second, it does not consider the time value of money. So, it is avoiding the basic rule of finance i.e. ‘a dollar today is worth more than a dollar a year later.’ In PBP, we calculate the years where the total investment is recovered. In true sense, it is only the principle which is covered; the portion of interest is still to be covered.

Other drawbacks include its inability to deal with uneven cash flows with negative cash flows in between. It may result in dual results.

Last updated on : September 11th, 2020
What’s your view on this? Share it in comments below.