Home
Financial Management
Equity Carveout – What It is And Why Its Needed?

Equity Carveout is a type of corporate strategy wherein a company sells a part of its business or one division through IPOs (initial public offering). To put it simply, it is a process of separating a subsidiary from the parent company into a standalone company. The subsidiary company works like a full company with its own board of directors and financial statements.

Equity Carveout helps both – the parent company and the subsidiary – in the following ways:

Now, if that business is carved out, it can work independently and investors will have full access to its operations. This could help it to achieve more valuation.

Cash infusion: cash proceeds from the sale of stake helps to capitalize on a newly formed entity. Moreover, the parent company can also share the cash proceeds. 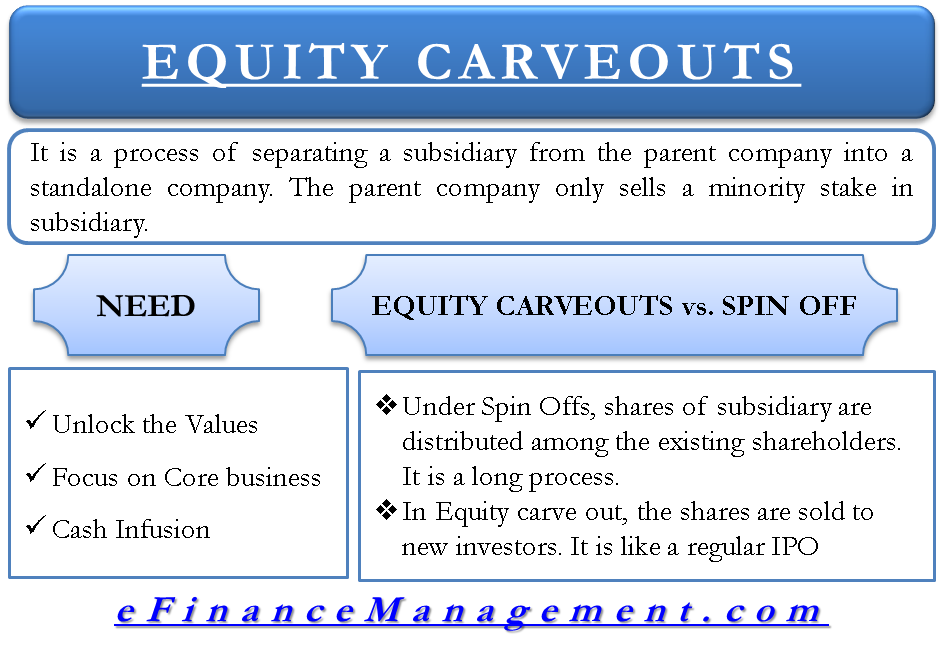 How it’s different from Spin-off?

The spin-off is also a type of carveout. Under spin-off, shares of the subsidiary are distributed among the existing shareholders of the parent company. In the Equity carveout, the shares are sold to new investors.

Further, a parent company usually goes for an equity carveout if it believes that there will be no single buyer available for the subsidiary, or its aims to maintain some control over the subsidiary.

Also, a spin-off is a long process and may take a few years to complete. So, if a parent company needs a quick infusion of funds, it is not a preferable option. On the other hand, equity carveout is like a regular IPO, which is filed with the SEC, priced and marketed to the investors, and may take about 4 to 6 months.

A parent company usually goes for such a carveout to retain control over its business unit or to boost its (parent company’s) share price. But, this does not actually happen as the new company (after a few years) gets acquired by third parties. A parent company with a majority stake may block such takeover, but doing this hampers the growth of the subsidiary. This may result in the conflict of interest between the management of the two companies.

Last updated on : February 18th, 2019
What’s your view on this? Share it in comments below.
Pin It Tweet