Cash flow to debt ratio as the name suggests compares the total cash flow to total debt due by the company. It is one of the coverage ratios used in the financial world to check the health of the company. The ratio tells about the debt-paying capacity of a company.

The formula of Cash flow to Debt ratio is = Cash flow from operations/Total Debt.

We can get the operating cash flows from the cash flow statement, while the debt amount is there in the balance sheet of the company.

Mostly, this ratio is expressed as a percentage. However, if a company wants to show the number of years it would take to pay off all it debts, then one can present the same ratio in years as well.

For instance, the cash flow to debt ratio of the company is 25%. Then, the formula to convert it in years will be 1/0.25 = 4 years. This means that the company would roughly take four years to repay all its debt from the generated cash flow.

Can We Use EBITDA or FCF?

We may also use EBITDA in the formula in place of the cash flow from operations. However, it is not a better option because EBITDA includes the purchase of new inventory. Usually, organizations take some time to sell the new inventory and generate cash flow from it. Therefore, EBITDA would not give an accurate picture of how much cash is available with the company to pay off its debts.

At times, analysts prefer replacing cash flow from operations with free cash flow (FCF). Free cash flow is taken after deducting cash used for capital expenditures. Using free cash flow will affect the ratio and show the company as being less capable of servicing its debt. The result could also differ if an analyst chose either the long-term or short-term debt to calculate the ratio. The ratio would give better results if the analysts select short-term debt, but the company has more long term debt on its balance sheet, and vice versa. 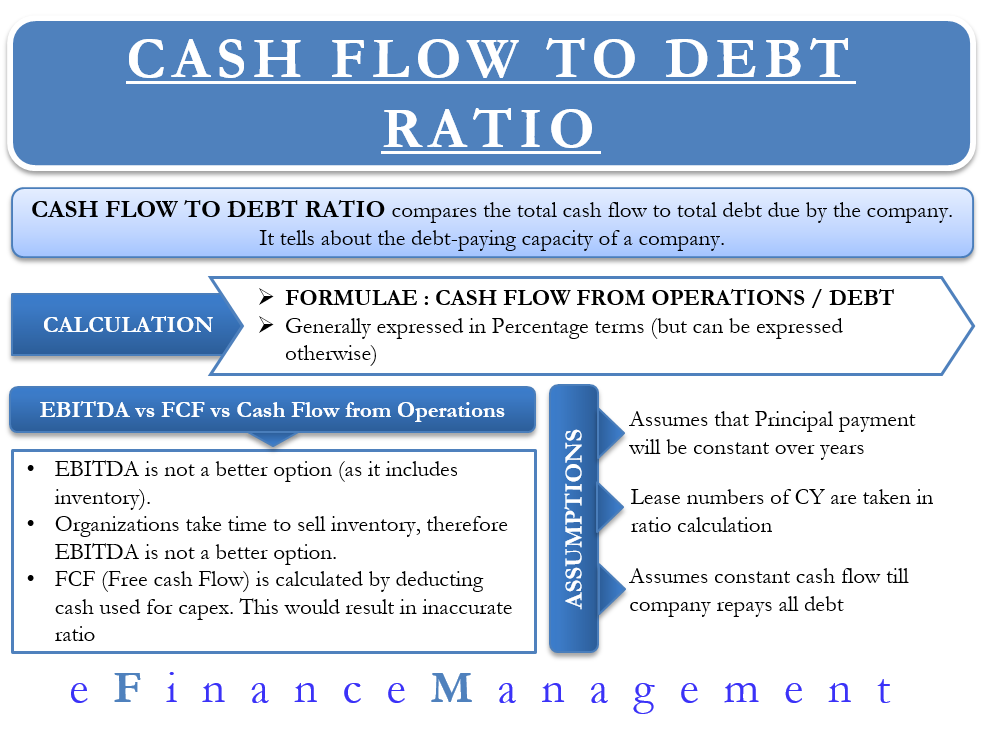 Does Not Cover Amortization

This ratio assumes that principal payments would not change and be consistent with the previous years. Although convenient to assume, this might not be the case in real-world scenarios. Over time, companies can avail various financial schemes that could be inclusive of balloon payments, bullet payments, and amortization and so on. All these schemes result in the company paying massive interest in some years and none in other years.

Lease numbers of the current year are taken into account while calculating the ratio. Usually, lease agreements come with a lease increase provision. But, the ratio does not reflect the same.

The ratio assumes that a company will earn the same cash flow in the future years at least until the company repays the debt.

How Much is Enough?

Usually, companies aim for cash flow to debt ratio of anywhere above 66%. The higher the percentage, the better are the chances that the company would be able to service its debts.  However, the ratio should neither be very high nor too low.

First, the company is big enough and efficient to generate higher cash flows in order to service its debt. This could be true in the case of big companies in the industry. These companies might also have more favourable terms and conditions with the lenders thereby having easy debt servicing agreements.

Second, there might be some companies that do not keep an acceptable debt portion in their books. Such companies would also have good cash flow to debt ratio. However, investors might have a second thought while investing in such companies. These companies might be borrowing too little which means that they are losing on the higher returns.

To check if the ratio is too high or low, a financial analyst should consider a ratio in context with the past performance of the company.  Or, compare it with other companies in the same sector.

The cash flow to debt ratio for the current year would not give the true picture of the company’s overall performance. Therefore, tracking the ratio over the past four to five years could help understand how the company has improved or gotten worse with time in paying the debt.

Last updated on : October 12th, 2019
What’s your view on this? Share it in comments below.