Companies raise debt and equity capital to buy operating and non-operating assets which are expected to generate revenue going forward. The activities related to the utilization of these operating assets are called the core operations of a business. For example, the activity of producing and selling toys for a toy manufacturing company would be considered its core operations. The net difference between the revenue generated by the core operations and the expenses directly incurred to generate this revenue is called the Net Operating Income.

The most common operating expenses are:

In our example above about the toy manufacturing company, the COGS would include the cost of the material used to create the toy along with the direct labor costs used in the production. SG&A would be comprised of the rent, administrative expenses, utility bills, the marketing campaign and the selling commissions.

Net Operating Income is an important measure of operating efficiency as it excludes the effect of financial leverage and taxes, which can vary widely among companies even in similar industries. The level of Operating Income is driven by various factors including pricing strategies, the cost of raw materials, salaries and the level of fixed versus variable costs.

The various items used to calculate Net Operating Income are reported on the Profit & Loss Statement (P&L) as follows: 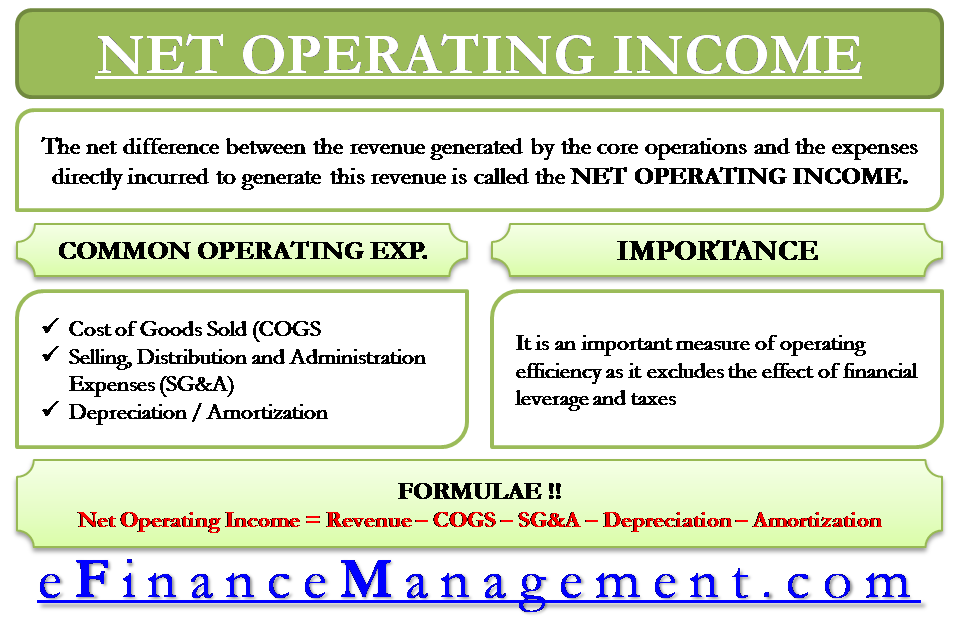 Net Operating Income is closely followed by investors as it represents the ability of a company to generate earnings through its core operations. It is the pre-tax income from operating assets that is available to all capital providers. It is also often used to compare profitability metrics between companies in a similar industry as it takes into account the capital intensiveness of a business. Net Operating Income should not be confused with Earnings Before Interest, Tax, Depreciation and Amortization (EBITDA), which is another commonly used measure by investors to assess the profitability of the core operations of a business. Contrary to Net Operating Income, EBITDA does not take into account the non-cash D&A expense so it facilitates comparisons between firms across different industries. EBITDA is often used as a proxy for cash flow from operating activities. The formula for Net Operating Income is often displayed as an adjustment from EBITDA as shown below.

To better understand how these figures are calculated in practice, you can look at the P&L below which provides a line-by-line example of the main items on the top line and bottom line.