Deflation is the persistent and considerable amount of reduction in the prices of goods and services in an economy. The fall in prices should be persistent and should continue over some time and not a few days or a week. Also, it should be a considerable fall and not just a minor one to be termed as deflation.

The purchasing power of money increases during the period of deflation, that means that more goods can be purchased with the same amount of money one has. Long term deflation turns into a recession and hence, is very dangerous. It can lead to a financial crisis with increased poverty, job losses, bankruptcies, defaults, and outflow of investment from the economy.

The significant causes of deflation are:

The monetary policy of the Central Bank plays a significant role in causing deflation. The Central bank, at the insistence of the government, may reduce money supply in the market and increase rates of interest to control an inflationary phase. It may also happen after artificial infusion of money in the economy over long periods. Reduction in money supply will result in lower cash in the hands of the people to spend. Production levels remain the same, resulting in an over-supply in the market. It will lead to a fall in the prices of goods and services.

The overall demand in the economy may also continue to fall at the time of falling prices. Buyers will expect prices to fall further and prefer to wait to buy. The demand does not pick up even with a fall in prices, as the public expects of a further reduction in prices. Such a vicious cycle is called a deflationary spiral.

People also tend to hoard money in times of deflation. They reduce consumption, waiting for a further fall in prices. Money flow and rotation in the economy reduces and results in a liquidity crunch. It further leads to a decline in demand.

Implementation of new technology in the production process or innovation of a new product, method, or idea may lead to increased production and efficiency in the economy. Producers may experience a decrease in input costs due to economies of large scale production. Passing the lower costs as well as increased supply may result in a fall in prices in the marketplace. 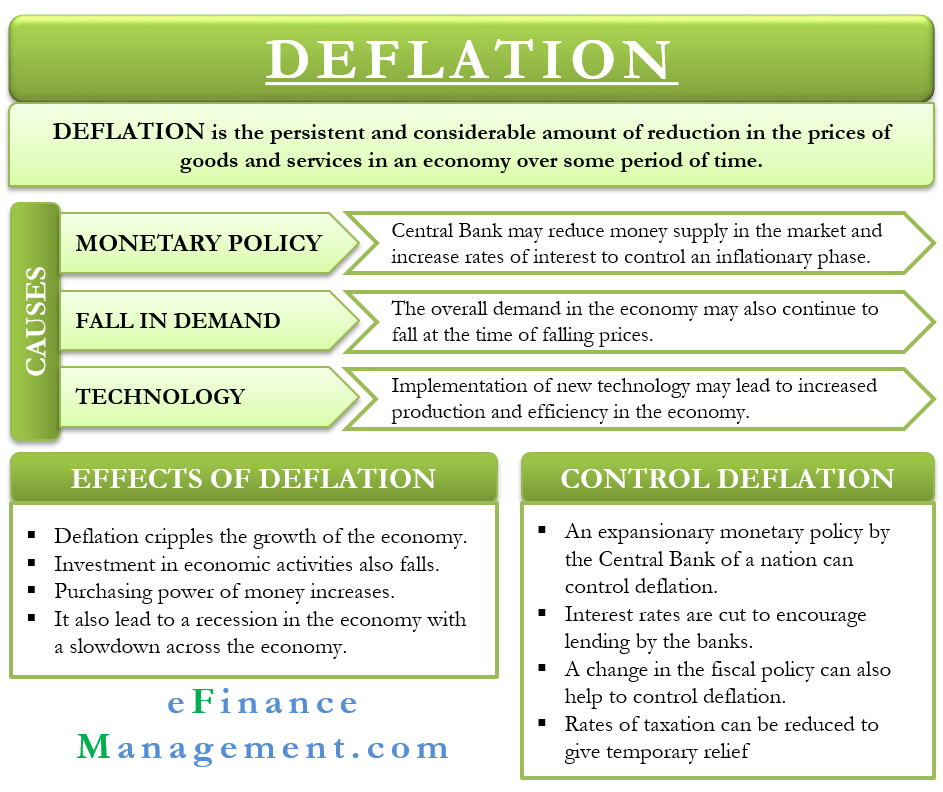 Deflation cripples the growth of the economy. A continuous fall in demand and price forces the manufacturers to slow down production and cut jobs. It leads to job losses and subsequently increased poverty in the economy. Unemployment leads to a further fall in demand in the marketplace, pushing the prices down further. Companies start failing, leading to more unemployment, defaults, and an overall liquidity crisis.

With a fall in consumption, investment in economic activities also falls. It adds to the vicious cycle of unemployment, a fall in demand, and a further fall in prices.

During deflation, the purchasing power of money increases. Since the value of money increases in the present times, debtors find it extremely difficult to repay their loans. In value terms, they have to repay much more than what they borrowed. Loan defaults increase, putting further pressure on the economy and lenders.

Loan defaults affect the entire banking system of the economy. Banks become more cautious in distributing new loans. Also, people get scared, and the needy rush to withdraw their money from banks. Banks and financial institutions start collapsing as their money reserves dry up.

All the above situations lead to a recession in the economy with a slowdown across the economy.

An expansionary monetary policy by the Central Bank of a nation can control deflation. Interest rates are cut to encourage lending by the banks. Treasury securities are bought through Open market operations to provide additional liquidity to the banks and financial institutions so that they can further lend. It also increases the supply of base money in the economy.

A change in the fiscal policy can also help to control deflation. Rates of taxation can be reduced to give temporary relief to the people and increase their spending capacity. The government can provide an economic stimulus and increase its spending on infrastructural and related activities to pump in more money in the system.

More money in the hands of the people encourages them to buy more. An increase in demand will increase investment. Prices will start rising, and the economy will be pushed out of deflation.

The most prominent example of deflation is the Great Depression of the 1930s across the world. It started with a fall in stock prices in the United States at the end of the year 1929. This fall was followed by a severe market crash and gradually resulted in the fall of aggregate demand and prices of goods and services. It spread to other countries, and the world GDP crashed by around 15%.

Tax collections and prices dropped worldwide, and international trade came to a grinding halt. Unemployment touched a record high to 30%-40% in some countries. The fall of prices continued with agricultural output losing over 50% of its value. There was a severe shortage of cash in the economy. As a result, companies went bankrupt, factories got shut, and economies got severely damaged.

The best measure of deflation is the Consumer Price Index (CPI). It helps to suggest the likely percentage change in prices of a basket of goods and services which a usual household will consume. It is calculated as:

For example, let us suppose that the price of a basket of goods and services a household consumes12 was US$500 last year. For the current year under observation, the same basket costs US$450.

Every consumer wants to buy goods and services at a rate lower than what he paid last time. It is good and healthy from a personal point of view and a short term.

The problem arises when this fall in prices becomes chronic and long term, pushing economies into deflation. Deflation can cause severe damage to any economy and result in a recession. Hence, the government, along with the Central bank of the country, should work hand-in-hand to control and rectify such situations when they arise immediately.