In production, the input could be material or non-material, which is then converted into an end product. This product may be sold to the end consumers and the cycle continues. The primary aim of production is to satisfy human want or creation of utility. This is what differentiates it from manufacturing.

A point to note is that the final product could not always be a fit for the end consumer’s consumption. Sometimes, it could also be a raw material for some other industry. Another point to note is that the production does not always result in creating a matter. It primarily means the creation of utility using the existing or available resources. Three common classifications of production are – Projects, Intermittent Processes, and Continuous Process.

You will now have some idea what both terms mean. Now let us see the differences between Production vs Manufacturing to get more clarity.

Following are the differences between Production vs Manufacturing:

Manufacturing involves making a good by using labor, machine, raw materials and other resources. Production, on the other hand, means using resources to make anything useful for consumption.

While the production does not always mean creating a matter, manufacturing is. Therefore, in economics, the services of doctors, lawyers, etc. comes under production. The reason being they are creating some sort of utility. On the other hand, manufacturing always requires the creation of matter, which is then consumable in some or other way.

Manufacturing process must involve the use of men and machine. For production, the compulsory resource is men.

In manufacturing, the input or the raw materials are tangible, means you can see them. In production, the input could be both tangible or intangible.

In production, a company or individual have the ownership of the raw material. For instance, farmers own the land to cultivate crops on it. The farmer sells these crops to the customers, thus creating utility from the raw material. Manufacturing, however, requires the procurement of raw material from different sources. Once a company procures the raw material, it creates a final product with the help of both man and machine on a large scale.

Output of the Process

In manufacturing, the end result or the output will always be a tangible good. This could be anything from a pen to a car that we require in our daily lives. Under production process, the end result could either be tangible or intangible depending on the input. In case of professionals such as lawyers, doctors, the final product is usually a service. 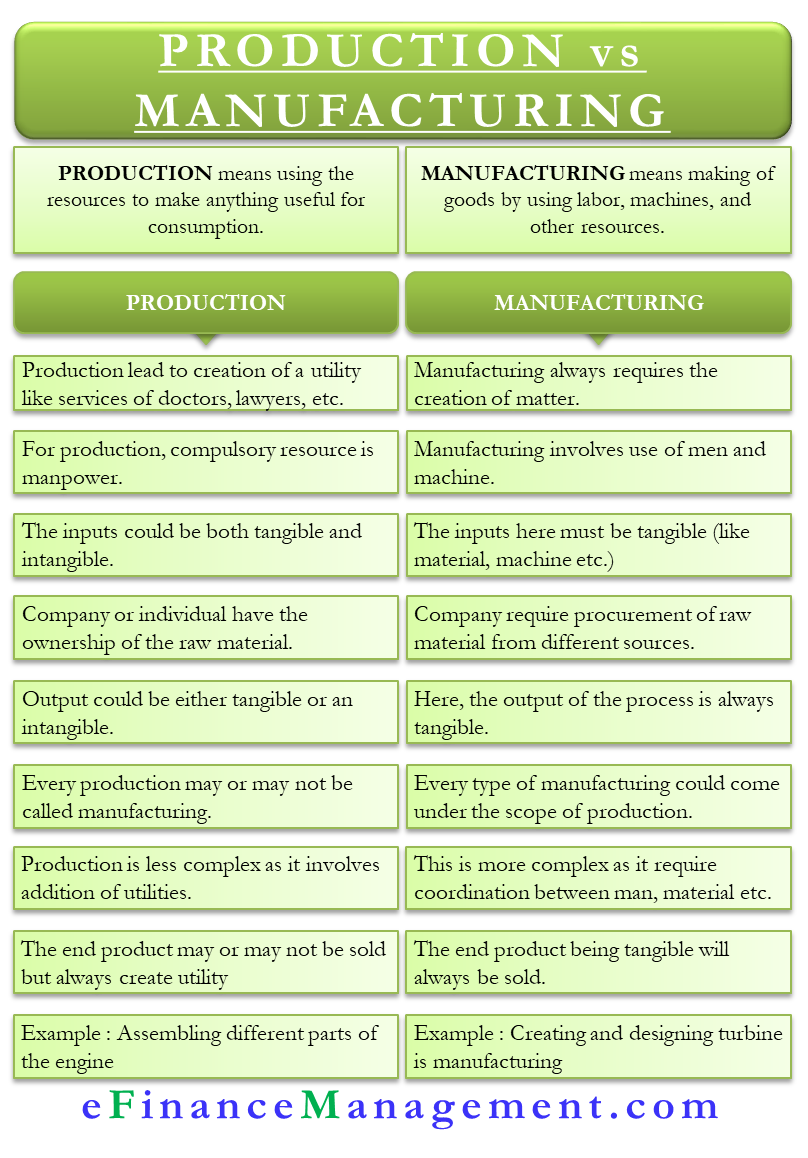 Manufacturing involves proper coordination between man, machine and technology to come up with the output. In comparison, production may be less complex as it primarily involves the addition of utility to the consumers.

For production, there may or may not be a need for machines. Similarly, large scale manpower might also not be a necessity in case of production. Manufacturing, on the other hand, does require large scale usage of both machine and manpower. Further, there has to be a physical facility where all workers can come to work and the machine could be set up. In the case of production, there is no need to have a large-scale facility.

Since manufacturing creates only tangible goods, therefore, it can be sold to someone else. On the other hand, production may or may not create a tangible product. This means the end product cannot always be sold to the next person, but it does create utility.

Creating and designing turbine is manufacturing. On the other hand, assembling different parts of the engine, which could be part of the turbine is production.

We can say that there is a very thin line between Production vs Manufacturing. However, by reading the above points, you will now know the subtle differences between them. But, considering the heavy usage of both these terms interchangeably, one would not be wrong using both the terms alike.1–3

Last updated on : December 31st, 2019
What’s your view on this? Share it in comments below.